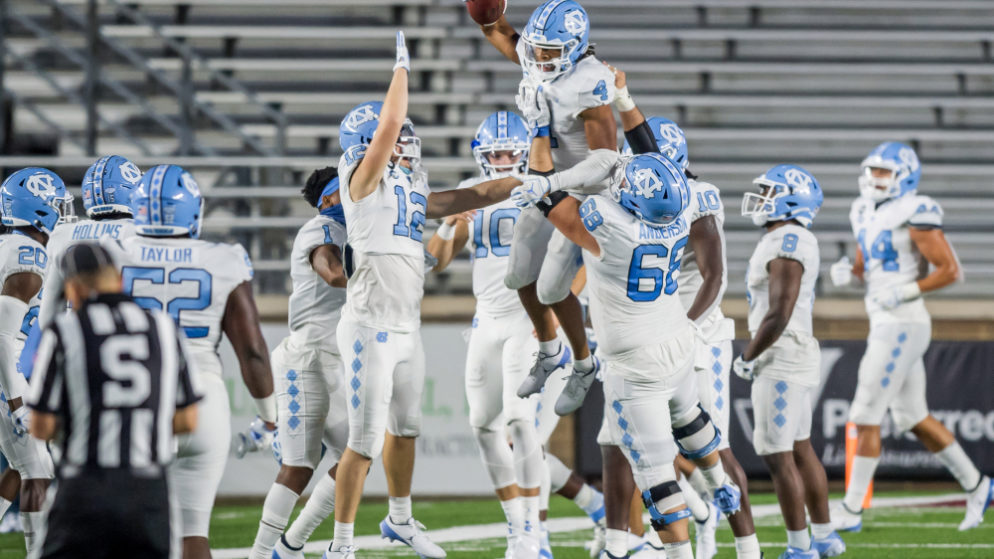 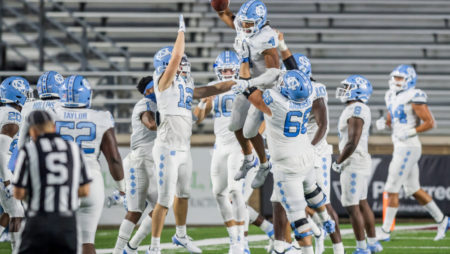 Oct 3, 2020; Chestnut Hill, Massachusetts, USA; North Carolina Tar Heels defensive back Trey Morrison (4) is hoisted into the air by teammates after intercepting a Boston College Eagles 2-point conversion attempt with seconds left in the game and returning it for a score to clinch the victory for the Tar Heels at Alumni Stadium. Mandatory Credit: Adam Richins-USA TODAY Sports

Not sure there’s a better way to start a College Football weekend than Enter Sandman playing as the Hokies take the field in Blacksburg. The entrance song has become one of the most unique and exciting traditions in the sport, and fans of any program can appreciate and elevate their excitement level when it plays.

Once the music dies down, the ball still has to be kicked off, and the Hokies will need to keep that energy because North Carolina has lofty goals this year.

Mack Brown has excitement around the UNC football program that has historically only applied to the basketball team in Chapel Hill. A big reason for that is quarterback Sam Howell, who enters the season as the starter for the third straight year and has been named the preseason ACC Player of the Year.

The Tar Heels had a lethal running attack a season ago, ask Miami, but both bell-cow running backs will be playing in the NFL this season. Tennessee transfer Ty Chandler and fellow back British Brooks should provide a solid tandem to step in behind Howell.

The biggest piece of the puzzle, literally, is the return of the entire offensive line to make the above-mentioned players’ jobs much easier.

On defense, Mack Brown has been able to make an impact on the recruiting trail with five-star cornerback Tony Grimes reclassifying and joining the Tar Heels as a freshman a season ago. Grimes was a big contributor on the defense last year and is poised to take another step with a full offseason under his belt.

Fellow defensive back Storm Duck is more than just an “all name team” selection. The junior is back after missing most of last season following an excellent freshman campaign. On the defensive line, freshman Keeshawn Silver comes in as the fifth-highest recruit to ever sign with the Tar Heels and hopes to provide an immediate impact in the trenches.

Virginia Tech has struggled to find its way back to its extended success under former head coach Frank Beamer. Head coach Justin Fuente enters the season on the hot seat as the Hokies have steadily trailed off during his tenure.

Virginia Tech lost four of its last five games to end 2020, including back-to-back blowout losses to Clemson and Pitt, before capping off the season with a win against rival Virginia. The 5-6 record marks the first time the Hokies have posted a losing season since 1992.

Offensively, the most significant loss for Virginia Tech comes at running back, as Khalil Herbert is now with the Chicago Bears. The do-it-all back found a load of success in 2020 and stabilized the offense, mostly running behind first-round pick Christian Darrisaw.

The rest of the offensive line returns, and quarterback Braxton Burmeister steps in to take the starting job. Defensively, Virginia Tech ranked in the bottom third nationally in points allowed, but should be improved this season, highlighted by pass rusher Amare Barno.

BetOnline, Bovada, and BetUS are all in agreement and have the Tar Heels as a 5.5-point road favorite for the Friday night showdown. North Carolina finished 2020 5-7 against the spread, and in all but two games, the Tar Heels result was more than a touchdown off of what the oddsmakers predicted.

Long story short, Carolina was one of the most challenging teams to handicap during the COVID season. For the Tar Heels to compete on the national stage, they’ll need to be much more consistent.

As unpredictable as Carolina was, Virginia Tech proved to be just as tricky for the oddsmakers. The Hokies were 4-7 against the spread and, similarly to the Tar Heels, only had two games within a touchdown of the predicted betting line.

The play here is to take North Carolina -5.5. This season, the Tar Heels should have a potent offense, and the defense should be above average. The Hokies could surprise some teams this year, but preseason the team doesn’t have the same pop to garner much excitement.