Ciryl Gane took three rounds to defeat Derrick Lewis, but it was one of the more dominant performances we’ve seen in the heavyweight division for quite some time at the championship level. Gane entered the bout as a -325 favorite and -125 to win inside the distance. He seemed to be comfortable going the distance with Lewis if that was necessary, but as the fight moved along, you could tell that may not come to fruition.

Gane was so smooth and light on his feet for a heavyweight that it was a sight to behold, especially when we are talking about someone who started training for MMA fights Odds just three years ago. Gane is proving that he is an elite athlete in the cage and someone that even fighters like Francis N’Gannou should be afraid of.

Gane and Lewis were given a pretty surprising interim title chance as the talks between Jon Jones and Francis N’Gannou had stalled earlier this year. Gane now holds the interim belt, and Francis should easily be the next matchup barring something strange going on in the N’Gannou camp.

Provisional betting lines for the Gane vs. N’Gannou matchup do exist, and Gane is an underdog at +165 with N’Gannou at -195. I think if we told anyone a year ago that Francis would KO Stipe Miocic in a rematch where he looked much improved and then turn around to not even be a -200 favorite against someone not named Cormier, Jones, or Miocic in his next fight, they would have been surprised.

However, after a performance like this, it is hard for me to suggest that this line isn’t a good one. Gane showed on Saturday night that he has the speed and athleticism to avoid big shots, the strength to win in the clinch if need be, and the power to finish big-time opponents if the situation calls for it.

N’Gannou will fight similar to Lewis, but with more speed, athleticism, and burst. This should make it, so he just more chances to explode into Gane and send him home, but Gane’s ability to maintain range and win the striking battle at the range was impressive and could give N’Gannou issues, as I do think that Gane would be the favorite in a fight that goes to a decision.

34-year-old Jose Aldo is not done with the bantamweight division just yet after defeating Pedro Munhoz in convincing fashion and announcing himself as a title contender once again.

With a title fight set up later this year between Aljamain Sterling and Petr Yan, a matchup with someone like Cody Stamann or Rob Font could be in the cards to have a fighter that deserves that next title shot against the winner of that matchup.

There are lower-level guys in the division that would also have a big pull against someone like Aldo like Sean O’Malley or Merab Dvalishvili, assuming he wins next month vs. Marlon Vera.

That being said, I expect Aldo to want a title shot within two fights, as the 34 years old likely doesn’t have that much time to challenge for the belt once more.

Aldo did look very impressive on Saturday night against Munhoz, and the biggest difference between the two fighters was the boxing. Aldo has begun to focus on boxing for other opportunities and to improve his UFC skills as well.

Aldo used to be known for his legs, but last night they were rarely used. Is this by design, or is this a result of training so much boxing that the rest of his game has taken a bit of a backseat. If he were to fight a well-rounded fighter, would we see combinations of old and new Aldo, or is “new Aldo” the only one that still exists?

Bet like a pro with our Sports Betting Picks, Betting Analysis and In Depth Gambling Site Reviews. UFC 265 Aftermath at Online Betting Sports 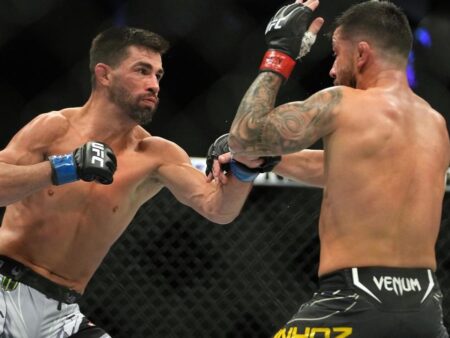