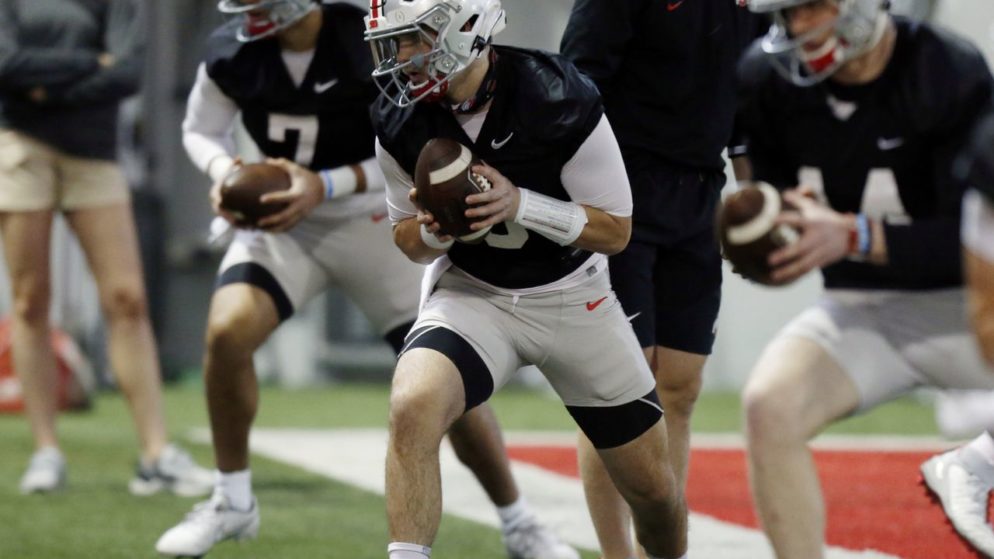 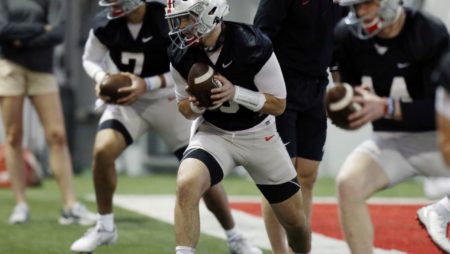 Last year’s runner up in the College Football Playoff National Championship enters the year as a favorite to win the Big Ten and likely repeat as a playoff contender. The Buckeyes win/loss total for the season is set at 11, a number that head coach Ryan Day has hit in each of his first two full seasons after taking over for Urban Meyer to close out the 2018 season. Despite some shocking losses to unranked teams such as Purdue and Iowa, Ohio State has managed to reach that win total in all but one season in the combined tenures of Meyer and Day.

Ohio State’s schedule sets up favorably on the conference side, as the Buckeyes avoid playing perennial Big Ten West contenders Wisconsin and Iowa.

The Buckeyes will face division rivals Penn State and Michigan State at home, but travel to Michigan on rivalry weekend, although that matchup has proven to be far from a challenge for Ohio State in recent years. An early out of conference matchup against the Oregon Ducks in week two will test the young Buckeyes and provide a good measuring stick of how far this team will be able to go. Along with the matchup with Oregon the big games to highlight for Ohio State are a road matchup with Indiana on October 16th, Penn State in Columbus the following week and despite the recent success against their rivals, Michigan at the Big House on the final weekend of the regular season is always a matchup to circle.

Oregon ranks top 10 in the country in returning production which presents a challenge for Ohio State’s numerous young players that will be expected to play big roles in the 2021 season.

The Ducks defense is led by future first rounder and possible top 5 pick, Kayvon Thibadeaux, and hard hitting linebacker Justin Flowe. Both highly rated recruits coming out of high school have made their presence known on the Oregon defense and offer game changing ability. On the offensive side of the ball Oregon joins the list of teams replacing (possibly?) their quarterback from the previous season. Anthony Brown seems to have the leg up on the competition over the two freshman quarterback challengers. Brown split time as the Ducks starter in 2020 and the former Boston College transfer offers experience at the position and could really elevate the team with an improved outing this season. The early season matchup gives Mario Cristobal’s squad a chance to put their name in the conversation of playoff contenders.

For those who may have lost track of college football during the shortened COVID season of 2020, seeing Indiana as a main challenger on Ohio State’s schedule could come as a shock.

The Hoosiers gave the Buckeyes their biggest challenge during the regular season a year ago led by quarterback Michael Penix Jr. Penix Jr is recovering from a torn ACL suffered last season but appears to be healthy entering his second season as a starter for Tom Allen’s team. If Indiana can build on the success they had in 2020 it’s possible this game sets up as a trap game on the road for the Buckeyes, who could be looking forward to a matchup with rival Penn State a week later.

Penn State arguably experienced the most disappointing season of all the college football teams that competed in 2020. The Nittany Lions lost their first five games of the season despite returning seniors at key positions on both offense and defense. James Franklin’s group did rally to win their final four games of the season, but it was easily one of the more frustrating seasons in the team’s recent history. Penn State looks to bounce back this year with quarterback Sean Clifford returning for an additional year, taking advantage of the NCAA’s allowance due to COVID-19 in 2020. Highly touted running back Noah Cain leads a fresh group of playmakers and tries to follow the legacies of recent Nittany Lions’ running backs Saquon Barkley and Miles Sanders. The Buckeyes should have the fire-power to endure a battle with Penn State, but this game has proven to be a challenge in the past.

Out of respect for the historic rivalry Michigan is listed as a game to circle on the schedule when looking at the Ohio State outlook for the season, but in reality this matchup has not caused the Buckeyes to lose much sleep in the past decade plus. Jim Harbaugh was brought back with a contract extension to the surprise of many. Harbaugh has yet to beat the Buckeyes during his time as head coach of the Wolverines, and based on the current trajectory it’s best to take a “see it to believe it” approach when predicting the next Michigan win over Ohio State.

Ohio State, much like many of college football’s recent powers, is replacing a highly touted and productive quarterback in Justin Fields. As hard as that may be to move past, the cupboard is far from bare in the Buckeye quarterback room. CJ Stroud enters the spring with the best chance to take over the job, but redshirt freshman Jack Miller and true freshman Kyle McCord won’t go down without a fight. All three of the young signal callers came to Columbus as highly rated recruits, and whichever player wins the job will give Ryan Day ample opportunity to see their offensive success continue in 2021. The winner of the quarterback competition will have the nation’s best wide receiving core to throw the ball to, as Chris Olave surprised many and returned to Columbus for his senior season and will be accompanied by running mate Garrett Wilson and the plethora of five star wide receivers Day has signed in the past two recruiting cycles.

On the defensive side of the ball the Buckeyes lose a majority of their linebackers that led the team to a College Football Playoff berth last year, but Larry Johnson’s highly touted defensive line will be a problem for opposing offenses. Returning starters Tyreke Smith, Haskell Garrett and Zach Harrison are joined by top ten recruits Jack Sawyer and J.T. Tuimoloau giving Ohio State a solid rotation of players in the front seven. Defensive backs Sevyn Banks and Josh Proctor lead a young, but skilled secondary that hopes to bounce back after a disappointing 2020 season.

Over 11 wins. Given the Buckeyes history, the favorable schedule and returning talent Ohio State should be able to navigate the schedule and lose no more than one game in the regular season. One loss would result in a push on this bet, but the upside of going undefeated seems more likely than the Buckeyes dropping two regular season games for the first time under Ryan Day.

CJ Stroud Heisman Trophy Winner (+1600): This bet could be over before it begins if Stroud fails to win the starting job over his fellow quarterbacks, but the betting odds are long enough and the winner of the quarterback battle will put up the necessary numbers to be in the conversation to take home the award. The news of 2022 recruit Quinn Ewers flirting with reclassifying throws an additional wrench into the equation should he decide to make that decision.

Ohio State National Champions (+600): The return on Online Betting the Ohio State Buckeyes Win the Big Ten (-220) doesn’t seem lucrative enough to discuss as Ohio State should be able to navigate towards another conference title. A Big Ten Championship and a lone, or lack of, loss should propel the Buckeyes into a third straight College Football Playoff. Once there, a six to one bet to win two games carries a reasonable return to justify the risk.

Sorry, no other posts related this article.