The Braves have an excellent home environment. Their fans are passionate, loud and play an important role in keeping the momentum going for the Braves. However, this Astros team has silenced many opposing home fans before, and they will look to do the same on Friday night.

Let’s look at the game preview and MLB betting odds for Game 3 of the World Series.

With the series all even at 1, the Moneyline at Bovada is nearly split, as the Astros are listed at -108, and the Braves are at -112.

Betonline also lacks a clear favorite, as Houston sits at -101 and Atlanta is at -109.

Braves Preview: Ian Anderson is the Man for the Job

We saw Ian Anderson in the Game 6 victory against the Dodgers in the NLCS. Despite only pitching four innings, the right-hander looked sharp, allowing only one run while striking out 4. The Astros have several star right-handed bats who could have trouble against Anderson on the hill.

The Braves offense will look to get back into their Game 1 rhythm, where they scored six runs, as they could only muster two runs in Game 2. This is a team that hits well at home and should produce more offense in game 3.

Astros Preview: The Core Stars Need to Step up

So far in the series for Houston, Michael Brantley has looked like the MVP. Other than him and a solid Game 2 for Jose Altuve, the players carrying the load have been Yuli Gurriel and Kyle Tucker. Which is fine, but a couple of high-profile stars have seemingly disappeared.

Alex Bregman and Carlos Correa are a combined 1-14 through the first two games. Houston needs their top-of-the-lineup mashers to step up and come through if they want to defeat the Braves in Atlanta.

RHP Luis Garcia gets the call in Game 4 for the Astros. Similar to Anderson, Garcia also pitched in the championship series Game 6, clinching the win.

In the victory, Garcia tossed 5.2 innings of shutout ball while striking out an impressive seven batters. The young pitcher will look to keep the good times rolling on Friday.

The left-handed batters have the advantage to begin this game with a couple of right-handed pitchers on the mound.

For the Astros, Michael Brantley has led the way offensively, hitting over .500 in the series. He has always been a model consistency at the plate and will look to add a couple of more hits against Anderson and the rest of the Braves pitching staff in Game 3.

Although Atlanta’s Joc Pederson has struggled through the first two games, he crushes right-handed pitching and loves to hit in the big moment. I would not be surprised at all to see “Joctober” continue and watch Pederson blast a home run on Friday night. Look for Joc to be aggressive against Garcia and try to do damage early.

Both teams have had a day of rest to reevaluate things and prepare for three games in a row in Atlanta.

I believe in Ian Anderson despite his youth and inexperience. He has shown the ability to rise to the occasion in multiple instances. As long as he keeps the ball down and avoids hanging breaking balls over the middle to Houston’s locked-in batters, he should be alright in this one.

With Anderson and the Braves lineup leading the way, my Game 3 MLB betting pick is for the Braves to hop back in front and take a 2-1 lead in the World Series. However, even though the first two games were not all that close, expect Game 3 to be competitive throughout. 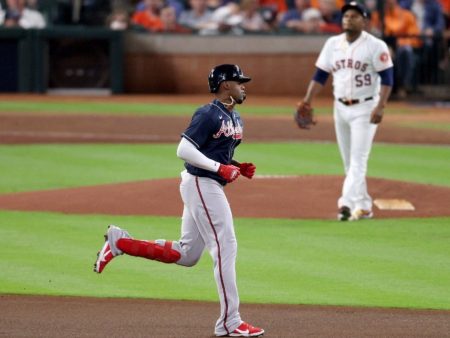