Michigan and Ohio State famously have one of the most exciting rivalries in college football. And they both have performed admirably throughout the 2022 campaign, as the No. 2 spot in the nation is on the line in this game.

The Wolverines almost dropped their first game of the year to Illinois last weekend, but they just did pull out a 19-17 victory. Meanwhile, the Buckeyes cruised to a 43-30 win over Maryland.

Michigan will need to play better on Saturday if they want to defeat the Buckeyes in Ohio. Both teams will be more than prepared for a game they have thought about all year long.

Kickoff is scheduled for 12:00 PM EST on Saturday, November 26th, at Ohio Stadium. Let’s take a look at the odds, trends, and predictions for this Saturday’s contest.

Both Ohio State and Michigan have fared in a similar fashion against the spread. Neither has dominated, but both have held their own.

Ohio State’s home-field advantage will play to their benefit, but the Wolverines certainly will not back down.

The Buckeyes and Wolverines will go head-to-head in Ohio for a pivotal clash. Here is a look at the odds, with Ohio State listed as the home favorite.

The Buckeyes are favored by just over a touchdown at home. Although they are at home, covering the spread will prove to be a challenge.

Michigan features an explosive offense and solid defense that is capable of getting the job done. As long as Blake Corum is healthy, the Wolverines are going to give Ohio State all that they can handle.

But this Buckeyes team has one of the better offenses in the nation. If their offense plays up to its potential, Ohio State will win this game.

The Wolverines trailed Illinois for a good portion of the game last week. A loss on Saturday would have been devastating, especially with a matchup against Ohio State next on the docket.

But they were able to take a late lead and not look back.

Michigan is led by Blake Corum, who very well may be in the Heisman Trophy conversation. Wolverines’ fans were forced to hold their breath after he left last week’s game early, but he was able to return.

Barring unforeseen circumstances, Corum should be ready to roll against Ohio State. On the season, Corum has recorded 18 touchdowns and over 1,450 rushing yards.

Michigan’s defense is impressive as well. They don’t have Aidan Hutchinson anymore, who was crucial last year against the Buckeyes, but this defense still has plenty of talent. And they will need all hands on deck in order to contain the Buckeyes.

Blake Corum may steal the show, but the defense will be the key to earning the victory.

Ohio State’s offense is their bread and butter. CJ Stroud is approaching 3,000 passing yards on the season. Additionally, the Buckeyes’ QB has 35 touchdowns compared to only four interceptions.

Stroud is going to receive plenty of Heisman consideration.

Ohio State is 12th overall in yards per game in the nation.

The Buckeyes’ defense is also solid. They have endured some tough games as of late, but for the most part, they are capable of limiting opponents. Their main focus will be on containing Corum out of the Wolverines’ backfield on Saturday.

If Ohio State can force Michigan into passing the ball on a consistent basis, they should find success.

Blake Corum is expected to play on Saturday. He is still limited to an extent, but Michigan plans on playing him against Ohio State.

Matt Jones is questionable after being seen on crutches following Ohio State’s last game. If he cannot play, the Buckeyes will need their lineman reserves to step up.

Which of these teams should you place your money on? Can the Wolverines upset the odds, or will the Buckeyes earn a pivotal home win?

This is going to be a good game that may be separated by less than seven points. As a result, I like Michigan as the spread betting pick.

With that being said, Ohio State’s home-field advantage should tip the scale in their direction. Look for the Buckeyes to earn an extremely competitive victory over their rival.

It would not be surprising to see a last-second field goal ultimately tell the difference on Saturday.

As previously mentioned, we should be in for a close and exciting affair! So, take the Michigan Wolverines +7.5 as your main spread betting selection. But, if you want to bet on moneyline, take the Ohio State Buckeyes. 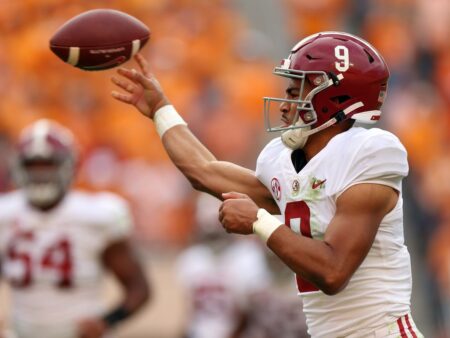