The Houston Astros and Philadelphia Phillies will go head-to-head in Game 5 of the World Series.

The Astros and Phillies are in the midst of a compelling World Series. Houston entered the Fall Classic as clear favorites, but the Phillies have made things interesting. As a result, an upset is certainly in the cards.

Game 5 will be the final game played in Philadelphia. The Phillies are going to come out in full force and do all that they can to propel the team to a win. But the Astros will not be fazed by the energized home crowd.

This matchup projects to be another competitive contest between a couple of very talented teams.

The first pitch is scheduled for 8:03 PM EST on Thursday, November 3rd, at Citizens Bank Park in Philadelphia, PA. Let’s take a look at the Astros and Phillies and betting odds for Thursday. Remember to check the NFL injury report for every NFL schedule you want to bet on.

The Astros have battled inconsistency throughout the World Series. Their struggles are surprising, given their impressive playoff effort.

The fact is that they ran into a red-hot Phillies ball club. Philadelphia is giving them everything that they can handle…but can the Astros answer?

One area where the Astros have surprisingly struggled is on the pitching side of the equation. They have already given up more than five earned runs on multiple occasions in the series.

It should be noted that Philadelphia’s lineup is extremely deep. However, Houston previously steamrolled through solid offenses without too much trouble.

Starting pitching has been the greatest concern. Stars such as Justin Verlander and Lance McCullers Jr have been unable to find their rhythm.

Framber Valdez has been their most consistent pitcher as of late. The left-hander led the Astros to a Game 2 victory.

Justin Verlander is the scheduled starter for Game 5. Verlander is an incredible pitcher and someone that Houston believes in. But with an exception in the ALCS against the Yankees, Verlander has not been very good in the postseason.

Is he capable of turning things around? Obviously. He is widely regarded as one of the best pitchers of a pair of generations. But it is safe to say that Philadelphia has the potential to give him trouble on Thursday.

The Astros need to win this game. We can expect Dusty Baker to lay all his chips on the table and give Houston the best opportunity to earn a victory.

The Phillies have continued to smash the ball all over the yard. Their offense is the driving force for their success.

Philadelphia’s pitching isn’t going to lead them to a win, but it can prove to be an X-factor of sorts. The bullpen is something to keep an eye on.

Pitchers such as Seranthony Dominguez and David Robertson can provide a much-needed spark out of the ‘pen for Philadelphia. Their starting pitching has let them down at times, so the bullpen performance will be a telling point in Game 5.

Noah Syndergaard is the scheduled starter for Thursday. He was previously expected to pitch earlier in the series but had his start pushed back after the rain delay.

There was stirring that Zack Wheeler would pitch on Thursday as a result of the early week rain delay. But Rob Thomson wants to give him as much time as necessary to rest.

Wheeler displayed a dip in velocity, and the Phillies believe it is a result of fatigue. The right-hander hasn’t had to pitch this deep into a season before, so he will pitch in a potential Game 6.

Philadelphia would love to win this game at home in front of its fans. Regardless of what happens, this will be the final home game they play in 2022. We can expect an all-in type of effort from the Fightin’ Phils against the Astros in this game.

The odds for this game have yet to be released.

Which of these teams should you roll with on Thursday? Can the Phillies take care of business at home, or will the Astros get the job done?

Philadelphia’s home environment is a major advantage. Their fans are passionate and give the team a boost of energy.

With that being said, Justin Verlander is not going to be fazed by the home crowd. Although Verlander has labored in the playoffs, he features the talent and ability to put the Astros in a position to win.

Houston’s offense will likely do enough to give them a chance to win as well. As aforementioned, Philadelphia’s starting pitching hasn’t exactly dominated for the most part.

Syndergaard may turn in a decent start, but the odds of him shutting Houston out are slim.

With all of this being said, the Phillies’ chances of covering the spread are high. Philadelphia continues to defy the odds, and they have played the Astros competitively without question.

As long as the bullpen holds things down and the offense continues to produce, The Phillies are worth the risk in Game 5.

Go ahead and place your money on the Philadelphia Phillies in this crucial World Series Game 5 affair. 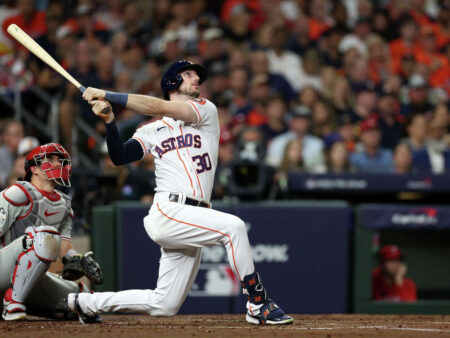