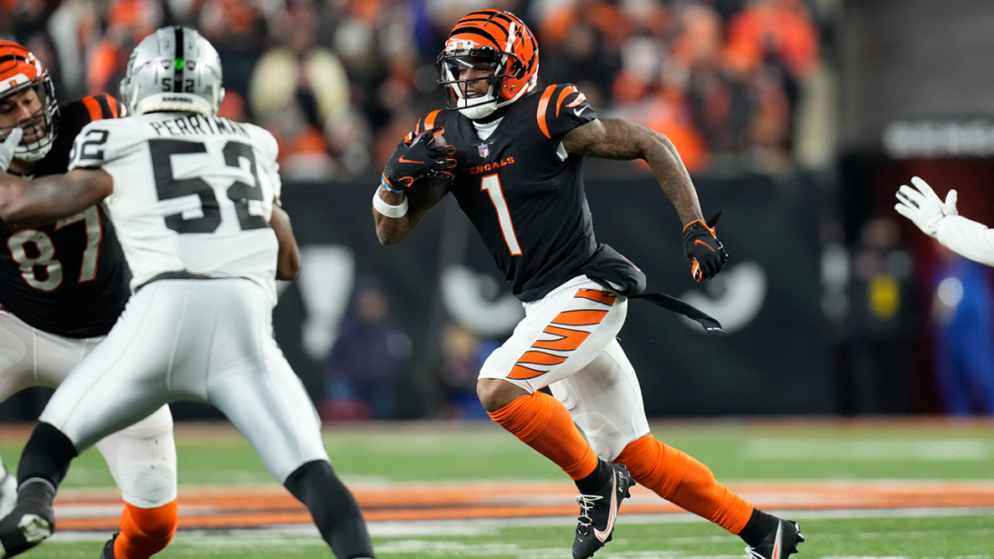 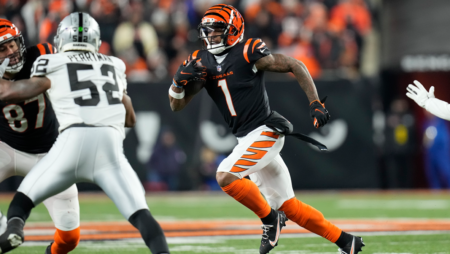 The Cincinnati Bengals head to Tennessee to play the Titans on Saturday afternoon in the divisional round of the postseason.

The Bengals held on for the win at home against the Raiders last week in the Wild Card round. However, they will have to play on the road against the number one seeded Titans on Saturday.

Tennessee earned a first-round bye as they will enter Saturday’s affair with plenty of rest under their belt. However, defeating Cincinnati will not be easy as the Bengals have been one of the hottest teams in football over the past few weeks.

Kickoff is scheduled for 4:30 P.M. EST on Saturday, January 22nd, at Nissan Stadium in Nashville, Tennessee.

The Bengals defeated the Raiders in the first week of playoff action last Saturday.

Cincinnati forced the Raiders to focus on passing the ball, which led to a 29-54 performance from Derek Carr, including one touchdown and one interception.

Joe Burrow only threw the ball 34 times for the Bengals, but he completed 24 of those attempts for over 240 yards and a pair of touchdown passes.

It was a first-half full of action, as the Bengals led 20-13 heading into halftime, and it seemed possible that a high-scoring shootout was destined to occur in the second half. But instead, both defenses stepped up their games, and we saw a combined 12 points in the entire second half, with both offenses producing six points each.

The Bengals earned a 26-19 victory, in the end, to advance to the divisional round in Tennessee.

The Titans will be a difficult matchup for Cincinnati. They are expected to have Derrick Henry return to the field to help out the offense, while the Tennessee defense is amongst the league’s best.

And that plays right into the Bengals’ hands with their top-tier passing attack. Cincinnati finished seventh in passing yards per game and seventh in points per game overall.

As long as the defense holds up, the Bengal offense has the tools necessary to lead them to victory.

The Titans got to sit back and enjoy a bye week in the Wild Card round.

The most important news is that Derrick Henry is expected to make his return to the Titan’s running back rotation in this game. His presence will greatly benefit an otherwise mediocre offensive unit. However, Henry may not see his usual amount of carries since Tennessee will need to ease him back into game action.

At the same time, if Henry is running well, the Titans could let him run wild since this is a win-or-go-home situation.

But the defense is the key to the team’s success. The Titan defensive unit features a balanced attack, as they have talent within the defensive line and in the secondary. Although they have struggled against the pass, Tennessee consistently finds ways to pressure opposing quarterbacks.

They finished the regular season ranked 10th in overall sacks with a mark of 42.

Finding ways to pressure Joe Burrow will be of the utmost importance on Saturday. It will be even more important if Tennessee’s offense labors to open the game. The last thing the Titans want to do is go down early and allow the Bengals to seize momentum on the road.

The Titans are favored by 3.5 points across the board for Saturday’s affair. The combination of adding Henry and extra rest provides them with a nice advantage leading into this game.

How To Bet On: Cincinnati Bengals at Tennessee Titans NFL – Betting lines

You should expect a hard-fought game regardless of who you decide to bet on.

The Titans worry me a bit because of their lackluster passing game.

Quarterback Ryan Tannehill was far from perfect this season which led to underwhelming numbers for wide receivers A.J. Brown and Julio Jones. So if the passing game is on point in this game, Tennessee should be fine from an offensive perspective since Derrick Henry will command the majority of the defensive attention out of the backfield.

But if Tennessee is unable to rely on their passing attack, the Bengal defense will be able to shift their focus completely to containing the run, which could lead to a long day offensively for the Titans.

This Bengal offense has been red hot as of late as well. The Titans will have a daunting task trying to limit them.

I believe momentum is on the side of the Bengals. They are fresh off of a win, and they believe they can beat anybody. I like Cincinnati to upset the odds in Tennessee on Saturday.

Pick up the best sports betting site, sign up and make your bet on the Cincinnati Bengals and Tenness