Philadelphia Union and New York City square off at Subaru Park this weekend in the 2022 MLS Cup playoffs.

The winners of this Eastern Conference final will go on to face either Los Angeles or Austin in MLS Cup 2022. Union finished top of the Eastern Conference this term, racking up an outstanding 67 points from 34 league games, while New York ended up 12 points behind in third position.

Philadelphia are unbeaten at home in 2022 and are the bookies’ favorites here, but the Pigeons will be well up for this playoff tie at Subaru Park. Check out the latest betting odds and best tips in our in-depth betting preview.

Philadelphia Union are odds-on to win this playoff final on home soil. Jim Curtin’s boys have hardly put a foot wrong at Subaru Park all year, and BetOnline are offering -133 for the hosts to come out on top in the 90.

If you fancy this to go the distance, you can get the tempting odds of +270 with MyBookie for the draw in normal time. As for the New York win, BetUS are offering big odds of +300.

When looking at Philadelphia Union’s home record this season, the smart choice would be backing the home win. Incredibly, Union have failed to score in just one home match in 2022.

However, New York City head to Subaru Park in fine form themselves, winning five fixtures in a row. They usually find the net on the road, scoring in six of their previous eight away games. Backing both teams to score (-135 at BetUs) could be a good option.

Philadelphia Union finished top of the pile in the 2022 Eastern Conference standings. They were beaten just five times along the way, racking up an impressive 67 points.

Union won 19 and drew ten of the other 29. They were the top scorers (72) and also conceded the fewest number of goals (26) in the division.

Since four home draws on the bounce from April to June, Curtin’s boys have won every home match, seeing off the likes of New York, Orlando City and Cincinnati along the way.

They went straight through to the playoff semifinals after finishing top of the table in the East. Philadelphia went up against Cincinnati at Subaru Park in the semis last weekend, nicking a 1-0 victory. The playoff fixture was goalless at the break, but Leon Flach netted just before the hour mark to swing the matchup in Union’s favor.

Philadelphia’s last home defeat came against New York at this stage of the playoffs last season. However, they had to play a second-string team and were missing six starters due to MLS Health and Safety Protocols. They will be out for revenge in this one.

Can New York Make It Six Wins on Bounce?

New York City responded well from a woeful run of form to book their place in the playoffs with three straight wins at the end of the regular season. The Boys in Blue finished up in third position in the Eastern Conference table, winning 16, drawing seven, and losing 11.

City went on to face Inter Miami in the first phase of the playoffs. After a goalless first half at Citi Field, Nick Cushing’s troops ran riot in the second period, with goals from Gabriel Pereira, Maximiliano Moralez and Heber securing a comfortable 3-0 win in Queens.

The Cityzens then played Montreal at Saputo Stadium in the semifinals, running out 3-1 winners thanks to strikes by Moralez, Heber and Talles Magno.

Including the two playoff wins, New York have put together an excellent five-game winning streak at just the right time. The 1-0 league loss at Charlotte in early September proved to be the wakeup call that Cushing and his troops needed.

Becoming the first team to win at Subaru Park since they did in last season’s Eastern Conference final will be a tough task for the visitors, but New York are in red-hot form right now. Can the Pigeons cause an upset and book their place in MLS Cup for the second season in a row?

These two evenly-matched teams have met twice since last year’s playoff. Philadelphia Union won both meetings, starting with a 2-0 victory at Yankee Stadium back in March 2022, with Alejandro Bedoya and Daniel Gazdag on target. Union then won 2-1 at Subaru Park in June courtesy of Mikkel Uhre and Cory Burke’s goals.

Philadelphia have been unstoppable at home this season. Luck was not on their side in the Eastern Conference final last year, but this time, Curtin has a full squad of players to choose from, and the home team will be desperate to make amends.

We fully expect New York City to play their part in what promises to be a thrilling final, as they are the defending MLS Cup champions and will not go down without a fight. However, we fancy Philadelphia to edge an entertaining encounter at Subaru Park. First and foremost, back both teams to score, which BetUS has nicely priced at -135.

The standout bet is the home win and both teams to score at +275 (BetOnline). There is also good value in BetOnline’s +185 for Philadelphia to be winning at half-time and full-time. 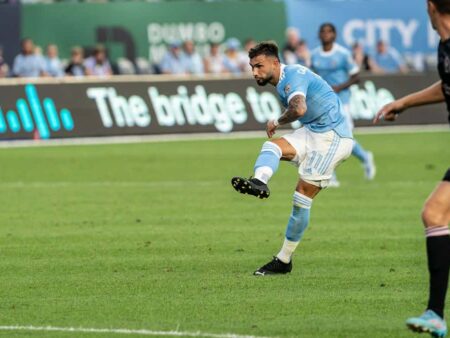