The Carolina Hurricanes and New York Rangers prepare to face off in a Saturday night MLB matchup. 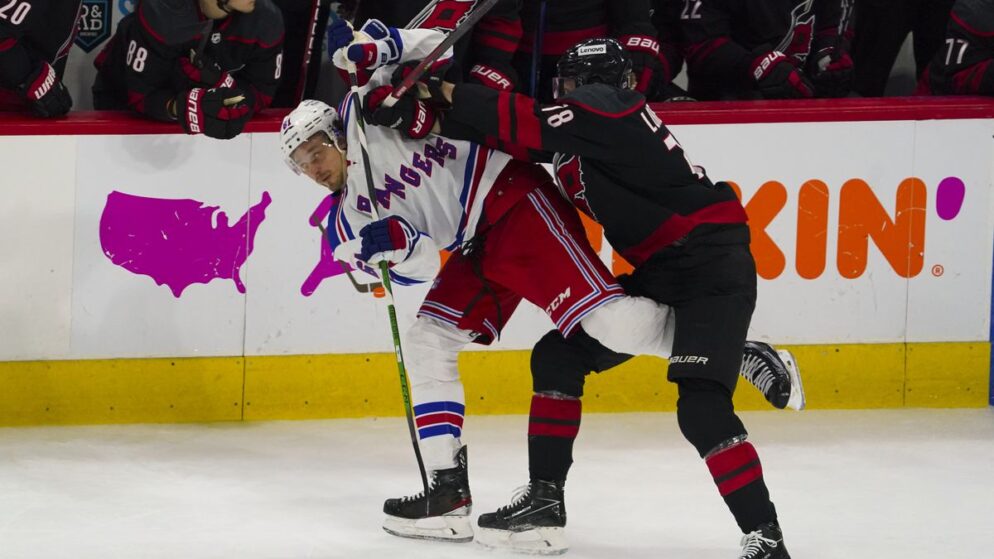 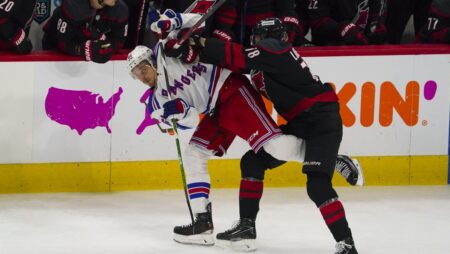 The Best Bets for Saturday, May 28th

The Carolina Hurricanes and New York Rangers prepare for a crucial Game 6 affair in New York.

The Hurricanes took a 3-2 lead in the East Semifinals with a 3-1 victory over the Rangers on Thursday. Carolina will try to close this series out on Saturday and advance to the next round.

However, neither team has won on the road in this series. Carolina took the first two games at home before the Rangers came roaring back with back-to-back wins on their home ice. And Carolina’s Thursday victory also came in front of their home fans.

So the pattern would predict a New York victory. But is that destined to happen? Or can the Hurricanes break the trend?

This game is scheduled TBD as of this story’s publication. However, it will take place on Saturday, May 28th, at Madison Square Garden in New York. We should be in for a close and exciting match!

The Carolina Hurricanes are the No.1 seed and looking to put the finishing touches on a series win against New York.

The Hurricanes have relied on their incredible defense and steady offense all series long… while playing at home anyway. However, they lost to the Rangers in New York by a final score of 3-1 in Game 3 and 4-1 in Game 4.

Carolina has looked like a different team on the road. They need to get things going offensively and contain the Rangers’ home offense.

Otherwise, there is going to be a Game 7.

The Hurricanes are known as an elite defensive unit. They finished first in limiting goals during the season. Carolina will need to rely on that defense in Game 6 against the Rangers in New York.

Expect a far better effort from the Hurricanes in this Saturday affair.

New York, on the other hand, will aim to repeat their Game 3 and 4 performances. The Rangers came out firing in both games and looked to be in complete control.

New York has relied on their defense even more than Carolina this year. The Rangers were just 16th in goals scored but finished 2nd overall in terms of limiting goals.

And overall, their defense has been tremendous in the series. They have not allowed more than three goals in any game and didn’t allow more than two goals through the first four games.

New York has displayed the ability to hang around with Carolina, and many expect them to earn the victory on Saturday despite being down three games to two.

In a similar fashion to Carolina, their defensive effort will ultimately decide their fate.

The Rangers are listed as the favorites for this Saturday’s matchup. But can we trust that they will indeed cover the spread?

Carolina is going to have plenty of motivation to clinch a series win in New York. They don’t want to face the possibility of a potential Game 7 win or go home affair. The Hurricanes want to book their ticket to the next round as soon as possible.

But as aforementioned, their road struggles against New York are concerning.

So can the Rangers cover the spread at home?

How To Bet On: Carolina Hurricanes at New York Rangers NHL Betting lines

Game 6 projects to be a thrilling affair between two of the NHL’s best teams. It is unfortunate that one of them has to lose this series because both enjoyed great seasons. But I am betting on New York to keep this series alive for at least one more game.

The Rangers’ offense has played with more energy and confidence in front of their home fans than we saw all year in their two home games this series.

And they should be able to contain Carolina’s offense.

Go ahead and roll with the New York Rangers -1.5 on Saturday in this Game 6 NHL contest.

This is our safe pick for Saturday. San Diego should have no problem taking care of business against the lowly Pirates at home in this ball game. Expect a solid effort from the Padres as they look to win this series.

Go ahead and take Atlanta in this ball game. The Braves are playing well over the past week and should be able to get the job at home against Miami. However, this could end up being an exciting and competitive contest.

Note: These odds have not yet been released

Regardless of what the odds are, I like the Rays in this ball game. Tampa Bay is one of the few teams that understand what it takes to beat the Yankees. This is the most enticing series of the weekend, and I am expecting Tampa Bay to get the job done.

Betting on Poland vs Argentina Picks & Betting Tips
26 mins ago